The incubation period or the end of vom-gate?

Not wishing to tempt fate but... we woke up 12 hours clear. Last night was a more relaxed evening with some children choosing to stay in their rooms for some down time whilst others took part in wacky races. A little birdie has spread a rumour about an impending room inspection - this may be the reason for a sudden interest in tidying - more on the room checks later.

Today has been another fun-filled day of the children pushing themselves to their limits. The trapeze was a source of worry for a few of the children upon arrival, however once they had seen their teachers have a go, many commented “if it can take your weight then I’m sure I won’t die” - charming! Tallulah and Millie pushed themselves beyond their comfort zones and even remarked, “it wasn’t that bad after all”. Aeroball was amazing with Miss Gould and Mrs Stone fighting for the first go... at  first the children were concerned about Miss Gould’s height advantage, however one eagle-eyed student remarked “No she’s not taller, she’s the same height as us!” Kids can be so brutal!

The sensory trail provoked looks of fear and disgust (mostly amongst the girls) when realisation dawned on them that their hair and clothes may get dirty! Children loved teaching each other the importance of team-work and communication when directing their blindfolded partner around a maze. Mrs Hicks claimed that she almost wet herself with how funny her group were; comments ranged from “what did I ever do to you?” “This is child cruelty” and “My mummy said that if I ever needed her I just have to scream.... MUMMY!” Needless to say, it took a while for Mrs Hicks to recover from the morning’s events! Carys needs a mention for her exaggerated reactions to being sprayed with water and tickled by grass when blindfolded - the gagging and screaming were priceless.

Most children were itching to get to the beach and disappointed to hear that they had to wait ALL day! Lots of children spent their down-time discussing outfits and accessories that they would be taking, whilst others spent their time planning how not to end up with wet pants... again!

Back to the room inspection - over the course of the week, rooms have varied in the way that they have been looked after. Some are almost so tidy that staff have questioned whether children are sleeping in them, whilst others have resembled the sort of hovel that would be best described within a Stephen King novel. The children have been very excited to showcase their new tracksuits and t-shirts although they have not shared the same interest in either changing such clothes, using toiletries or deodorant. One child admitted to Miss Gould that she had actually been walking around in her pyjamas all day. Clearly rocked by this news, Miss Gould decided to delve further... Big mistake. It transpires that she hasn’t actually brushed her hair or teeth all week and has declined to use deodorant! We’ll leave you guessing the identity of that dirty devil...

The differences between rooms were huge - scores out of ten ranged from -10 to 10... Below you can see the good, the bad and the downright disgusting! Parents, top marks to you if you can spot your child’s room... It must be noted that the children did not appreciate the room inspection with some attempting to sneak in for a last minute tidy. James declared “It is creepy to photograph our rooms” and Rosie pleaded with us to make parents aware that she was tidying up her bed which made it messy first, she squealed “I don’t usually live like this” 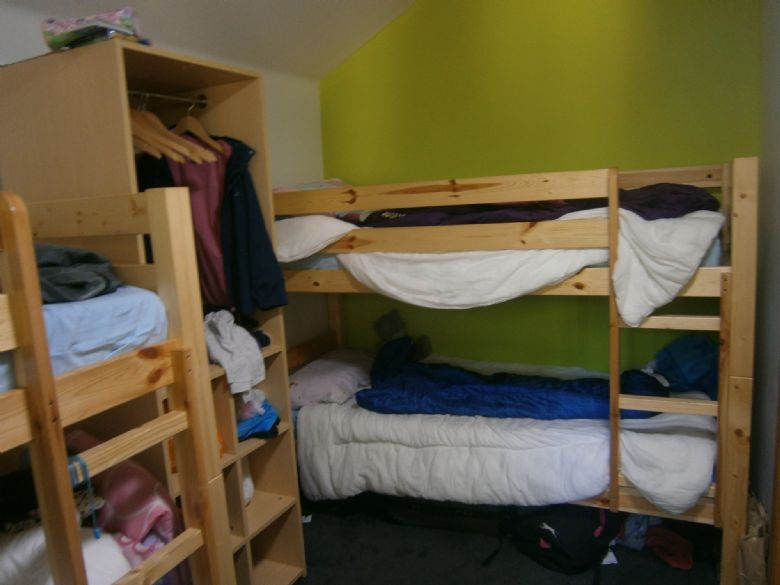 On Wednesday, the big guns came out with some children being given clear direction to shower, although such commands were generally received with grunts of disapproval. Despite this, the smell after this was vastly improved much to the pleasure of the staff.  We have encouraged the children to keep their windows and doors open during down time, however, on a breezy day, the smell downwind has been especially unpleasant! Our condolences go to parents and caters that have the delightful task of sifting through the dirty clothes - Tunbridge Wells tip may have an influx of visitors this weekend.

It’s safe to say that some children are beginning to miss their creature comforts. Feeding times are not always greeted with cheers at Little Canada; whilst the majority are eating enough for 180 children, two children were overheard describing their fantasy pizza toppings whilst another described how delighted he will be to have ‘a huge slice of greasy pizza’ when he gets home! Dominos pizza may be an idea for welcome home dinners... A special mention must be made about the child who has declared daily that she does not like eating anything for breakfast; we have tried in vain to encourage a meal with some sort of nutritious value however this morning we hit a particular low when she was found eating pots of butter - PGL food clearly isn’t for everyone!

Quiz of the day:
Which child has been first to volunteer on all of the activities and has been such an amazing support to his group all week?
Who ate pots of butter for breakfast and requested frozen peas for dinner?
Who did not think that they could go onto the trapeze at all but then made it all the way to the top?
Which cabin did not wake up to an alarm they set for 11pm?
How many times did one child complete a circuit of their cabin balcony?

We are now off to the beach to enjoy our last night together... we are looking forward to an evening of games, fun and giggles. More on that tomorrow - over and out!