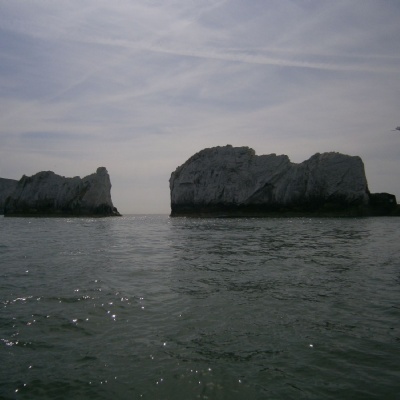 The beast is back...

It was an early start for Woodlands with our trip to the Needles today and so the children were woken before seven this morning - thankfully Mrs Brown did not wake us too early as she was hoping not to feature in the blog today, however she did wake the staff with a morning photograph via text so we felt it needed mentioning!

The beast... We were almost 34 hours clear of vomit and the victory dance was being rehearsed - staff and children alike were cheering (as we are sure you all have when reaching the end of the 48 hour clearance) - alas, our celebrations were premature... very premature. By the time breakfast had finished, two more had fallen foul to the beast and many others began feeling rather queasy (staff included). This did not bode well for our trip, however we were optimistic that again they were isolated incidents and when both children were spoken to, they were happy to come along and skip any very active activities. As we dished out the sandwiches, it became apparent that some of the choices may have been selected from home as an either/or, rather than one single selection - two boys weren’t keen on their cheese and jam/ham and jam concoctions and considering the resurfacing of the beast, we decided it was sensible to speak to the kitchen and get them swapped.

The trip to Alum Bay was more sedate than day one with children playing games and singing quietly - it appears that the lack of sleep really was having an effect! Miss Gould provided a source of entertainment when she fell backwards during her sickness-patrol and ended up resembling a disorientated stag beetle with FLUORESCENT pink toenails in the air. Not one to be outdone, Mrs Stone decided that she would also fall backwards in an equally dramatic fashion as we dismounted, however she managed to fall straight into SatNav’s lap... You can’t get the staff these days!

Upon arrival, the children were instantly drawn to the parade of shops that they had already mentally spent their money in. Many were planning what to buy for each member of their family whilst others were estimating how many sweets £15 would buy them. After a quick toilet (and coffee) stop, we were ready to attempt the huge number of steps separating us from our destination - we can assure you that the children complained far less on the way down! Since the steps caused so many moans, Mrs Hicks stood at the top filming the event for your amusement (once edited).

Once on the beach, children began discussing the erosion that was evident and attempted to find the caves, stacks and needles. One child excitedly declared how awesome it is to see what we have been learning about in REAL life. It is amazing to see the excitement on their faces at such moments. Sadly for us, this was followed by questions of “Are we still in England?” and “Can we see London over there?” (It was Bournemouth!) Geography and map work in Year 6 may need a little bit of revision in term six.

The boat ride was rocky although extremely enjoyable. The Needles were a fantastic sight and everyone was amazed to take in the sights and surrounding landscape. After this, we took a trip to the glassworks to watch a demonstration. The children showed excellent knowledge and Daisy even won herself a prize! After this, the children took themselves off to the shops to buy souvenirs and sweets... We are sure that most of you will be overwhelmed with the gifts coming your way on Friday, I’m not sure the shop has ever sold so many magnets and novelty plastic key rings...

As we reached our final destination, the children were itching to dip their feet in the sea. They were given clear instructions not to pass the points at which teachers were standing at, however this did not stop them from turning into soggy messes within minutes. Some children were a little more cautious, with one even asking Mrs Isaac (knee deep in water) “Is it wet in there?”. Others chose to show off their ball skills with the rounders set and two quite simply chose to be buried in the sand! Only one word could be used to describe the day’s events... INSANE!

Aside from vom-gate, another point to be noted is the huge number of teeth that appear to be falling out. Every time we turn around someone either has a tooth in their hand or is twisting one like Nanny McPhee! The tooth fairies may need to take out a loan - the children seem to think that they receive interest for each day that they hold on to them!

Yesterday’s quiz answers:
The child that was caught in the fence was Leo - he found the whole event very amusing!
Matthew required WD40 to escape his harness, his cool and calm nature saved the day.
Darcy and Millie showed incredible resilience and did not let themselves be overcome by fear. To be honest, everyone has behaved in an equally determined manner, but these two definitely deserved a mention.
The first three children to receive a forfeit were Alfie, Jack and Emily. Tutus, hair bands and fairy wings were out in force! Dexter came a close fourth and happily took his punishment with a smile on his face!

Today’s Quiz of the day:
Which child told the same joke, approximately 10-15 times, to almost every member of staff? Quote: What did the cow say to the goat? I’m dairy-free (we aren’t sure if the order of the joke was accurate...)
Which two children selected cheese and ham with jam for their packed lunches?
Whose hat blew into the water at the precise moment that they boarded the boat and had to be fished out by the staff?
Who spent £4.50 on Isle of Wight seasoning that he had been talking about ALL day?
Who asked for a Hoover after the sandy remnants from the beach came back to their cabin?
Who announced to the coach that they needed a body shower because they had sand in the wrong places?

Another incredible day of adventures filled with smiles and wonderful bursts of laughter. The children are making this an incredible experience for everyone involved.