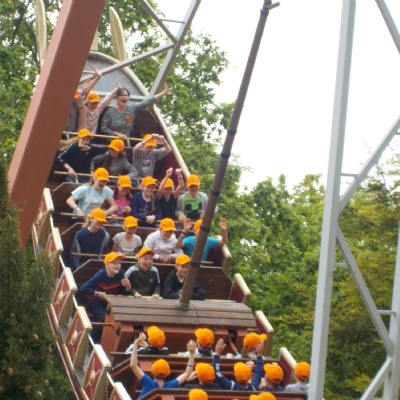 The day started with a sunny farewell to parents, followed by a chorus of "Are we on the M25 yet?" and "Are we nearly there yet?" at approximately 7:15! The children were in great spirits and enjoyed naming their coach drivers; Coach A began with 'My name is Jeff' although when informed that Coach B were travelling with 'SatNav', they thankfully renamed him 'Captain Gunner' due to the abundance of Arsenal memorabilia adorning the coach.

Both coaches delivered impressive renditions of The Greatest Showman soundtrack - Mrs Jones may not be needed for her musical talents when it comes to our Year 6 production - the girls in 6 Peach seem to have it all in hand and the boys on Coach B know every word. Despite the jovial atmosphere on the coaches,  one girl immediately  decided that she was not entirely impressed with her day group and proceeded to pester Mrs Timms with cries (whines) of "Please let me join your group... PLEASE!" - Thanks Lily - i'm not so bad as a group leader am I?!

Waiting to board, the children were informed that they needed their passports, 'Wight' currency and had to have their photos taken on departure. Cue a chorus of, "My mum didn't pack my passport" and "How do I change my money?" Despite this, most children happily posed for a faux photo and were delighted that their coach driver had successfully persuaded the ferry controller to let us board despite the absence of passports and currency.

Once aboard the ferry, the children devoured their second breakfasts leading us to believe that the singular bout of travel sickness on Coach B was an isolated incident- how wrong we were!! Mrs Anacleto, Mrs Isaac, Mrs Stone, Miss Gould and Mrs Totham were elbow deep in vomit for most of the afternoon, whilst also trying to suppress their own feelings of nausea. At the time of publishing, three children had succeeded in their mission to vomit in every mode of transport and venue visited today. Watch this space on further updates on vom-gate.

However, today really has been 'sick'. The children were absolutely thrilled to explore Robin Hill Country Park and the facilities on offer. A firm favourite amongst staff and children was the Captain's Galleon ride. We felt as though the ride attendant may have a case of repetitive strain injury by the time we left, caused by the children's instance to have "just one more go,". After this, the children bounced their way through the tree tops and then back down the toboggan run before settling down for some lunch (bad idea).  Many children enjoyed a ride around the tranquil park on a tractor, taking in sights and even meeting a peacock and family of ducks along the way.

Upon arrival at PGL, the children were greeted by their friendly groupies (Harry and Ellie) and were taken to the cabins to reveal the much-anticipated news of who would be sharing a cabin with who. Cheers rung out around the hall and some children even began performing a victory dance! It became very apparent that some children had a lot riding on this moment when we were greeted by a pre-made sign that had been made (by one of our lovely boy's sisters) listing the cabin inhabitants that her brother WOULD be sharing with (the staff were also pleased that we hadn't scuppered their dreams by omitting one of the boys!) The biscuit boys are VERY happy bunnies.

As we write this blog, our lovely Woodlanders are enjoying a game of catch the flag with their groupies and some very tired members of staff... The children have unpacked, decorated and set out their sleeping bags (and special pillows) ready for a good night - We are all hoping for a smooth, rather than sick night.

Quiz of the Day:

Parents- do you think your child could have done any of the following?

We hope that you have enjoyed reading all about our adventures on Day one of our adventure. Your children have, as always, behaved beautifully and fully embraced the opportunities that they have been presented with. We are extremely proud to be sharing this experience with them.